Baby Keem is an American rapper, singer, songwriter, and record producer from Las Vegas, Nevada. Starting his career in 2017, he initially gained major recognition following the release of his single “Orange Soda”, from his second mixtape Die for My Bitch in 2019. He would later appear with Kanye West on the song “Praise God”, which reached the top 20 on the US Billboard Hot 100 chart. Since then, he’s become his cousin Kendrick Lamar’s protege, with his debut studio album The Melodic Blue being released in September, 2021 by Columbia Records and Lamar’s pgLang American media company. The album debuted at number five on the Billboard 200 chart, with the single “Family Ties” featuring Kendrick Lamar becoming his second top 20 hit on the Billboard Hot 100, and receiving the Grammy Award for Best Rap Performance.

The song “hooligan” is a non-album single that was released in 2020 between Die for My Bitch and The Melodic Blue. The track serves as Keem’s long awaited return to solo music since the release of Die for My Bitch and after a slew of guest appearances. The song finds Baby Keem detailing his reckless lifestyle. From women, to cars, to material things, he lives a fast life and is readily described as a “hooligan”. 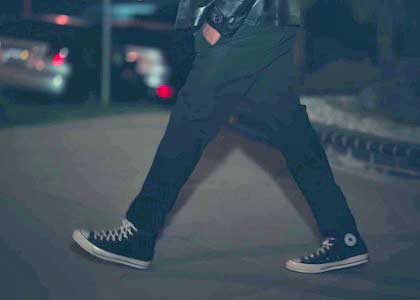 Stepping on the street in chucks.

The music video begins with Keem walking down a dark road alone. As he makes his way towards the camera, we see he’s wearing black high top Chuck Taylors with a black leather jacket. The video cuts to him sitting on the edge of a bed with a woman as she lays on her stomach and applies her makeup. She’s mouthing the words to the song and Keem stares directly into the camera. This is a theme throughout the whole video as Keem is continuously paired with different women who mime the words to the song as he stares blankly and directly into the camera. Keem doesn’t speak a single word in the whole video actually, which can be interpreted as him not wanting to tell the story of his reckless lifestyle. It could be due to shame or it could be wanting his words to speak for themselves. It’s visually a very interesting video despite taking place in a residential setting and not having any large set pieces. It just tells a simple story in a visually interesting way and sometimes that’s all a video needs to be.

Get a new pair of black high top chucks for your lifestyle.